Post-war Europe was a time of great innovation and new ways of thinking. As well as technological advances brought on by the necessary evils of war, a whole generation was looking for a brighter, more optimistic future. Capturing the mood of the era, the Panton S Chair used new technologies and looked incredibly futuristic. 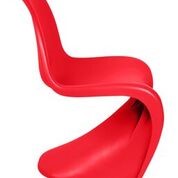 Other designs of the 1960s featured similar ideas but what made the Panton Chair unique was down to the material chosen for its manufacture. Since the swinging sixties, the chair has been through three production phases in line with advancements in the technology that made its conception possible.

The idea for the chair was born in the fifties, the beginning of mass-produced, affordable goods that provided function and fun in equal measures. The Panton Chair was the first chair to be made from a single piece of moulded plastic. Plastic, as a furniture material doesn’t seem too unusual for us now in the 21st century but it was a different matter during the mid-20th century.

The type of plastic used was invented as early as 1907 – synthetic plastic produced from carbon polymers. However, it wasn’t until the 1960s that this type of plastic became popular. For Panton to design a chair from a material that hadn’t been used for this purpose before and only known for its heat-resistant qualities and not its aesthetic appeal, was quite revolutionary. To combine this with bright colours and a shape that seems to defy gravity made it even more radical. For your own Panton Chair, visit https://www.pash-classics.com/verner-panton-chair.html

Panton was Danish by birth, born in 1926. He trained to be an architect, as so many furniture designers of the time did. He worked alongside the iconic Arne Jacobsen before founding his own studio in 1955. Here he would focus on his passion for pattern and colour. 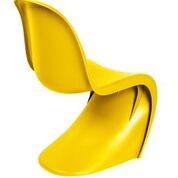 The Panton S Chair was produced in 1967 in collaboration with a company called Vitra. It had taken a substantial period of refinement before going into production. It would be the company’s first independently developed piece of furniture and the pilot launch consisted of just 150 chairs. Production actually stopped in 1979 due to aging plastic compounds causing quality problems.

However, the seed had already been sown and the chair had grown a cult following. Achieving some fame, the Panton Chair appeared in a photo sequence with Amanda Lear called ‘How to undress in front of your husband’. It has since been featured on the front cover of Vogue magazine with a glamourous and very naked Kate Moss draped over it!

The chair was re-released in the 1990s to celebrate Panton’s work. Sadly, Panton died in 1998, just a year before seeing his beloved chair re-released in a stronger and more durable material called polypropylene.