There was once a time where basement flats had such a poor reputation that not even the most desperate of aspiring tenants would consider them. They were for a long time regarded as being damp, dull and generally unpleasant places to stay and while some landlords in London may have got away with renting them comfortably, others in other areas around the country struggled immensely. 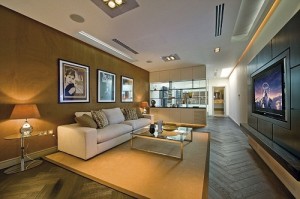 Nowadays, the situation is completely different. While the typical basement flat can hardly be described as penthouse-esque, it certainly doesn’t have the dreaded reputation that it used to have. Of course, there are basement flats out there that are still in the exact same condition as they were twenty years ago. But, unless they have loyal tenants, they are generally hard to let out as more and more people are used to the loftier standards that isexpected from such accommodation.

We’re now going to take a look at just some of the ways in which the typical basement flat has been transformed. Again, we’re not saying that all basement apartments are like this, but if you are given the opportunity to view one don’t immediately dismiss it as there is every chance that it is almost as good as the standard flat.

Nobody likes to sit in darkness – but that’s what many occupiers of basement flats used to have to put up with. Of course, there were lamps around, but nothing quite beats natural light that was at an absolute premium. Some flats had access to a lightwell, but on a lot of occasions landlords blocked these up for security reasons.

Nowadays the situation has changed enormously. Lightwells are regularly made a feature of a property, with landlords under more pressure to provide a secondary means of escape for fire purposes. However, an improvement in construction methods has also aided the situation and with tubular lights becoming exceptionally popular, it’s now possible to draw natural light from the roof of the building and into the basement with absolute ease.

While light was a barrier, it was nothing in comparison to the dampness that was regularly experienced in this accommodation. Several years ago, it was simply not affordable for many landlords to effectively waterproof the area but there are now countless solutions on the market aimed at tanking cellars and basements. Most of these are now much more financially viable for the typical landlord, and many understand that if they fail to deal with the issue of damp satisfactorily they will see tenants move on quickly.

Some would say it was difficult access, others would claim it was just pure dodgy. Access into basement flats has always been something of a taboo subject and a lot of women in particular actually refused to live in them at one point due to security. Many of these apartments had back-alley staircases that were draped in darkness, meaning that it certainly wasn’t desirable to venture down there as soon as night fell. Fortunately, there is now much more of an emphasis on security and with developers also looking to achieve Secured by Design status, blatant lighting often accompanies these means of access.

We’ll finish this article with something that actually hasn’t changed too much. Despite the above, interest in basement flats is still poor compared to standard accommodation, meaning that some tenants pay 40% less. This means that there is still terrific value to be had for a tenant and if you are on the search for some inexpensive local accommodation, this could be the way to go.